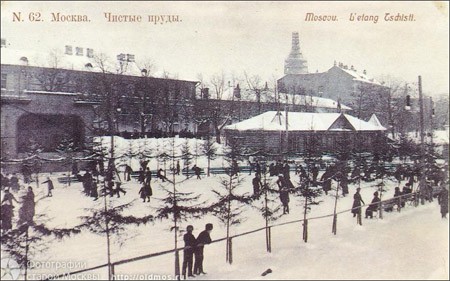 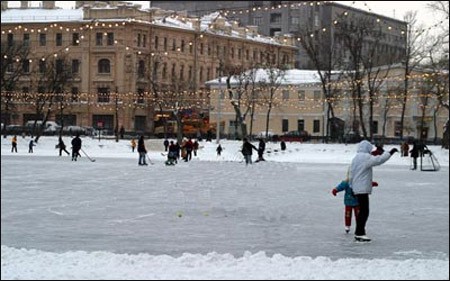 Skating rink on Chistye Prudy, 2005
One of the favourite pastime of Muscovites in the winter is skating. Nowadays there are numerous skating rinks spotted all around Moscow. They are intended for any taste and pocket. There are both indoor rinks and outdoor rinks with natural or artificial ice. It is impossible to exclude ponds of Moscow which serve to be natural spot for skating. Chistye prudy is one of such places where everyone can skate free of charge provided that you have your own skates. The old photo taken in the early 20 century (between 1900-1910) shows that it was a popular spot among Muscovites to spend free time. It also became a shooting spot for the Soviet film "Pokrovskie vorota" . Nowadays children and adults still can enjoy spending their free time on the skating rink as it is seen in a new photo.

This part of Moscow Chistye prudy has been known since bygone days. That time these ponds were filthy. Sewage from nearby areas was dumped there, particularly from butcher's rows located in the vicinity. However, in the 17th century, these ponds were ordered to clean. From that time onwards they have become one of the most favourite places to stroll. In the 21st century it also became a venue for open air photo exhibitions as well as a spot for youngsters' social gatherings; street musicians.

To see this sight one can do during a Moscow tour since it is a part of the Boulvar Ring or by oneself having learnt from your Moscow tour guide.