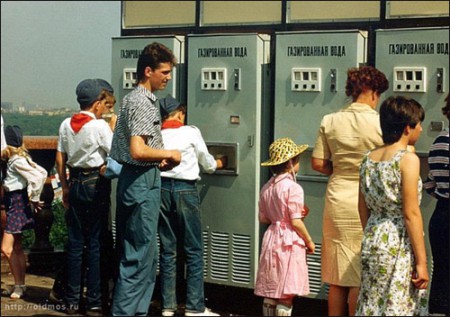 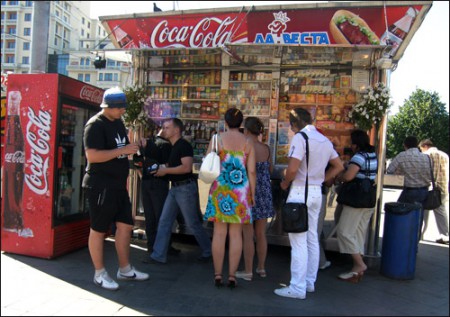 Coca cola kiosk, Moscow, 2010
In the time of my childhood (late 1980-s) the favorite drink of all kids was lemonade. You could buy it almost everywhere; it was 1 kopeck for a glass of pure sparkling water and 3 kopecks for lemonade. (Just to compare: an ice-cream cost 10 rubles).  Every machine had two glasses that people washed before drinking. At that time we didn’t know about disposable cutlery.
First Coca Cola was brought to the USSR in 1979. It happened as a preparation for the 1980 Olympics. But it wasn’t as popular as it is nowadays. There were very few places  where one could buy it. Only Perestroika and globalization made major changes. Today you’ll see same soft drinks in Moscow as probably  elsewhere in the world. And lemonade machines will remain nostalgic images of our past.
But may be you can still find something really Russian to taste? Another popular drink in Russia is kvas. But that is another story. Ask your Moscow tour guide about it.