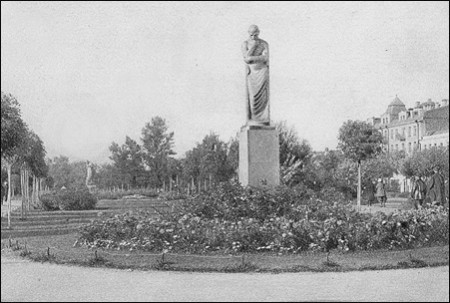 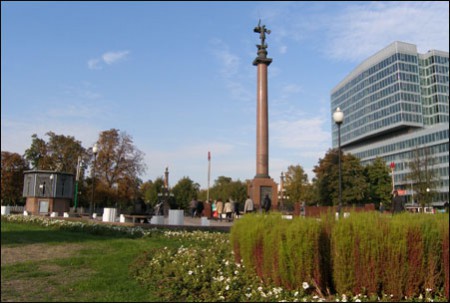 'St George' obelisk onTsvetnoy bulvar, Moscow, 2010
The pictures were taken in the beginning of Tsventoj bulvar. Its name is derived from the Russian word for "flowers" as in the 19th century there was a flower market nearby. This boulevard was laid out in the 1830s to replace the river-bed of the Neglinnaya after this river was hidden in a tube underground.
The beginning of the boulevard has always been an attractive location for different monuments. For some reasons they never remained here too long.
In 1913 an unusual obelisk was installed here. It was made of flowers and it was devoted to the tercentenary of the Romanov dynasty in Russia.
The monument we see in the old photo appeared later. It's called "The Thought" and it was cast by the famous Soviet sculptor Mercurov. The sculpture was put up in 1918. Mercurov couldn't imagine that the fate of his 'Thought" would mysteriously repeat the fate of another great sculpture in France – 'The Thinker" by Rodin.
Both sculptures were initially put up in public places in Paris and in Moscow. Some years later (in 1922) "The Thinker" was moved into the Roden museum park as the sculpture was obstructing public ceremonies. In 1934 the sculpture by Mercurov was also relocated (to a small inner yard of  a house) due to the boulevard reconstruction. "The Thinker" ended up on the grave of the great French sculptor. The same happened to "the Thought" – it was placed on the grave of Mecurov in the Moscow cemetery.
In 1995 a new sculpture was erected on Tsvetnoy bulvar. This is an obelisk crowned by a small figure of St. George, the patron saint of Moscow. The obelisk is devoted to the Russian militia.  The inscription on the monument reads: "Grateful Russia to the soldiers of law, who died in the line of duty."
During your Moscow tours your guide can show you lots of interesting monuments.