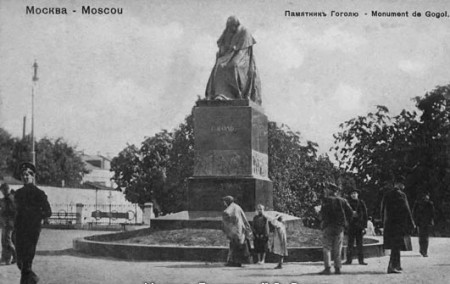 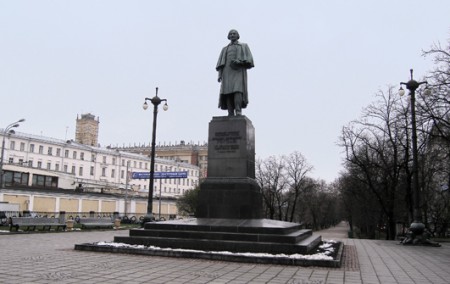 Gogol's sculpture by Tomsky on Gogolevsky bulvar. Moscow, 2009
Gogol is one of the greatest Russian writers of the 19th century, his most famous works include Taras Bul'ba,  Dead Souls, the play The Inspector-General.

The monument to Gogol was unveiled in 1909 at the beginning of Prechistinsky bulvar. It was a very unusual sculpture.  The sculptor Andreev created a very sad image: The writer was sitting hunched, deep in his thoughts, unwilling to look at his contemporaries. "This martyr suffered too much for the sins of Russia" exclaimed the artist Ilya Repin on seeing the sculpture.

The monument stood on its original site up to 1952.  A legend has it that Stalin drove past Gogol's sculpture not long before the 100th anniversary of Gogol's death. The Soviet leader didn't like the monument, Gogol's pensive and mournful look "didn't reflect the Soviet reality". Stalin gave an order to replace it with a more "optimistic" sculpture.  The sculptor Tomsky completed the task. The Soviet Gogol looks much happier; he's standing solemnly with a slight optimistic smile. An absurd inscription was written  on the pedestal: "To the great artist in words Nikolay Gogol from the Government of the Soviet Union."

The original Gogol was transferred to the inner yard of the writer's house in Moscow. Today there're two Gogols in Moscow that have completely different characters.