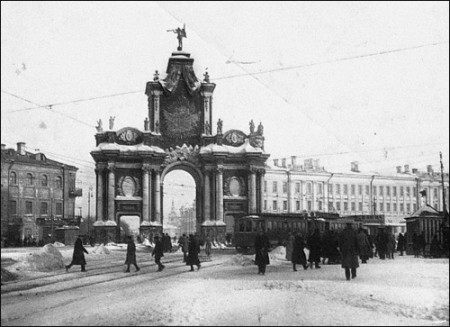 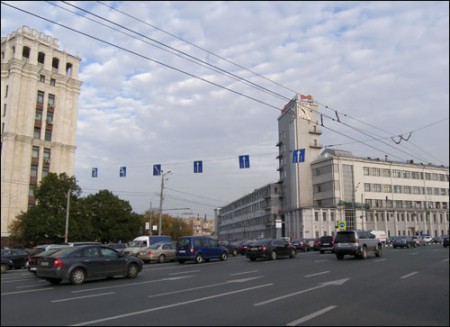 The first triumphal arches appeared in Russia in the time of Peter the Great. The original gates were built to commemorate the  Battle of Poltava in1709. Red Gates were reconstructed several times throughout the 18th century. In 1753 the wooden arch was replaced with an elegant stone one, designed by Dmitry Ukhtomsky.  The monument survived until 1920s. However in 1926 the Soviet Government announced the demolition of the gates and other buildings nearby, to make way for the Garden Ring expansion. Several famous Soviet artists and architects were trying to rescue this unique monument but it didn't help.
To the left of Red Gates we see an old mansion, it was in this house were a famous Russian poet Lermontov was born. To the right of the gates is a former store premises that were reconstructed in the early 1900s for the School for Noble Maidens.

Moscow changed enormously in the 20th century. Today the only building we can recognize is an old 18th century church. You can see it in the old photo (right in the center, behind the arch). Today a reconstructed church is standing on its original site. (right behind a dark blue car in the center). The square is still known as Krasnye Vorota (Red Gates), and in 1935 acquired Metro station of the same name.
On the left we see the famous Stalin's skyscraper erected on the square to a design by Alexey Dushkin. To the right – the ministry of transportation designed by a famous Soviet architect Fomin.

During your Moscow tours your guide will tell you more about the history of our cty.