The synagogue on Bolshaya Bronnaya 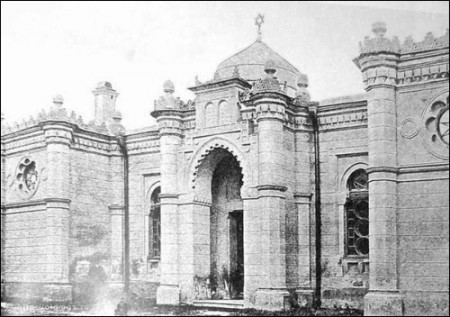 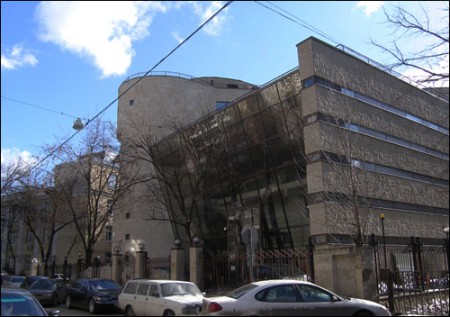 The synagogue on Bolshaya Bronnaya, Moscow, 2010
The synagogue on Bolshaya Bronnaya was opened in 1883.  It was a private synagogue founded by a successful businessman, millionaire Polakov who was the head of the  Jewish community in Moscow
The synagogue was initially an ordinary Moscow house.  It was bought by Polakov and reconstructed by the architect Chichagov in beautiful Moresque style.  There was a secret tunnel underneath  that would help the congregation to escape during pogroms.
In 1937 the synagogue was closed.  The soviet Government converted it into a trade union meeting hall, the rabbi was executed.
Only in 1991 the synagogue was transferred to Chabad Lubavich community.  Since 1991, the rabbi has been Yitzchok Kogan. Today it has classrooms, a bookstore, mikvah a lecture hall, and kosher restaurant.
A new building was constructed by Sergey Estrin and Larisa Vishnichenko. If you look attentively at a contemporary photo you’ll discover the old façade hidden under the glass wall.
If you’re interested in the history of the Jews in Russia consider including the synagogue in your Moscow city break itinerary.