Home → Time Gap → Christ the Savior Cathedral today and before

Christ the Savior Cathedral today and before 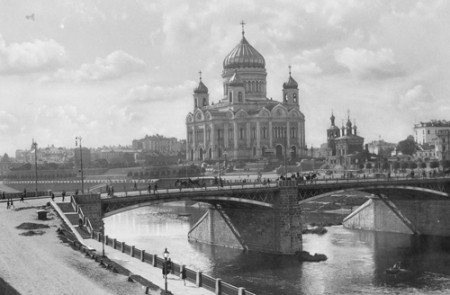 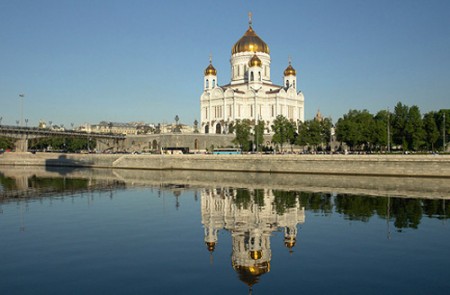 Christ the Svior Cathedral, Moscow, 2009
Christ the Savior cathedral was built to celebrate the victory over Napoleon and as a memorial to the heroic sacrifices of the Russian people. Alexander I signed the manifest on the cathedral construction in 1812 but it took many years before his dream came true. The cathedral was consecrated only in 1883. Some of the best Russian painters of the time embellished the interior
To the right of the Cathedral we see a small church on the old photo.  It's called "The church of the  Eulogy of the Most Holy Theotokos".

In the Soviet times both the small church and the Cathedral of Christ the Savior were destroyed.
This place was chosen for the construction of the gigantic "Palace of the Soviets". The bridge (the one we see on the old photo) was dismantled and a new Big Stone bridge was constructed closer to the Kremlin.

Luckily the project of the Soviet government was not carried out.  In 1990s a new cathedral was built as an exact replica of the old one. It's amazing how similar they look – the old and the new cathedrals.  In recent times many new churches were built in Moscow. Russians are trying to return the heritage lost in the Soviet times. This is why modern architecture is not popular in church construction; new churches look very traditional, the same way as they were before the Revolution.
To the left of the cathedral we see a bridge. A new footbridge was constructed in 2004 and now it's a perfect spot to see the panorama of the historic center of Moscow.

Your moscow tour guide will tell you more about the history of the cathedral. We do reccomend to get inside this magnificent building.