The house of Romanov boyars 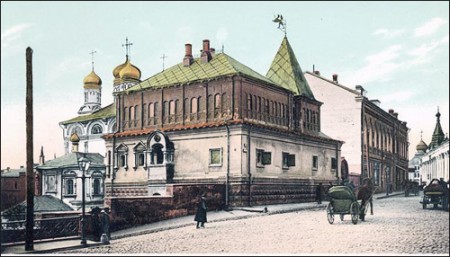 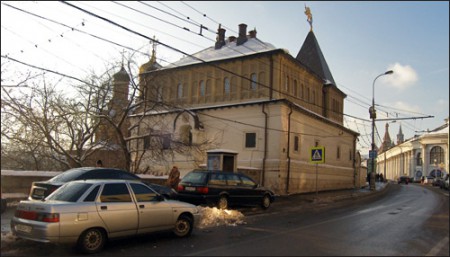 The house of boyars Romanovs, Moscow, 2010
The old house we see on both pictures is a very unusual Moscow museum. Its official name is The Chambers of the Romanovs Boyars. It is here were the Romanovs family lived in the 16th century. The first tsar of the Romanov dynasty Mikhail was believed to be born in this house in 1596. Today it is a museum devoted to the Russian nobility's lifestyle of the 16th-17th centuries.

Looking at both pictures we feel that little has changed in this old Moscow district. Just imagine the same street without any cars and you can feel you're travelling back in time. Varvarka street is truly unique, it's like an open air museum of the ancient Russian architecture. Behind  the Romanovs chamber are the domes of Znamensky monastery, and if we walked a little further we would find many more bright Moscow churches, mediaeval houses and even the first embassy of England (16th century) in Russia.

The building of the Romanov house was reconstructed several times. In the 17th and 18th century the house was slowly falling into decay. The old "palace" was not comfortable for the ruling tsars. The situation improved only in the 19th century. In  1856 the emperor Alexander II arrived in Moscow for the coronation. When visiting the old family estate he was horrified with its pour condition and ordered to restore it. A few years later it was reconstructed by the architect Rihter and a memorial museum of Romanov family was opened here.

It's a great luck that the museum survived the Soviet era. No surprise that there were plans to shut it down. Can you imagine a memorial museum of the family, whose "rotten throne was overturned and trampled by the Socialist revolution"? But luckily in 1923 the was reopened  under a new name. It was called "the house of the XVII century nobleman". And the objective was to demonstrate the contrasting life of the noble class and their servants. Only after the Perestroyka the original name of the Romanov's chamber was returned.

If you're interested to learn more about the Russian history and everyday life of the Russian nobility do not miss the  chamber of the Romanovs Boyars. It's only a few minutes from Red Square and you can easily include it in your Moscow tours  itinerary.