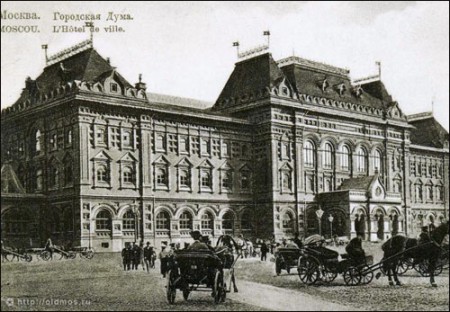 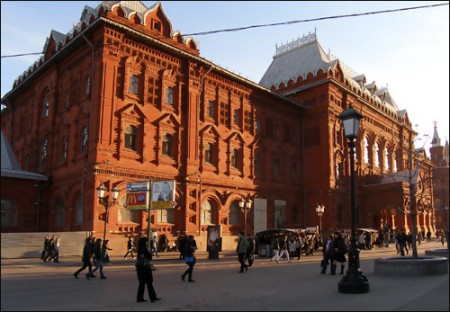 Moscow History museum, Moscow, 2010
The old photo was taken in front of the former Moscow City Hall. This building hasn’t changed much. Today we can easily recognize its red-brick façade.
Unlike other European capitals, Moscow had no city hall until the late 19th century. It was built in 1890 thanks to the efforts of the Moscow mayor Nikolay Alekseyev.  This was a man of incredible energy and enthusiasm. He’s famous for the construction of the city's first sanitation system, the first pressurized water supply network reaching individual houses.  This man was said to have dropped on his knees begging for money   for public purposes. It happened when Alekseyev, personally attached to the fate of the mentally sick, called for construction of a new psychiatric hospital in 1889. In the end a wealthy merchant Ermakov agreed to give a million.  Alekseyev was shot in his office inside Moscow City hall by an insane visitor. He remains the only mayor of Moscow to be assassinated.
. After the Russian Revolution of 1917, the duma was disbanded. In 1936 the building was handed over to the Lenin Museum. Opulent pre-revolutionary halls were either plastered or painted over, so as not to distract the visitor's attention.  In the almost 70 years of its existence the Lenin Museum was a powerful centre of the Soviet propaganda.
At the present time the Lenin Museum is a branch of the State historical Museum. It was closed for a long time during 1990s-2000s and had no exhibitions. It was opened for the first time in 2010 with the  exhibition devoted to Napoleon.
You can easily recognize this building walking around the central Moscow. There're no more carts or cabs in front of it, it’s a walking area. The building is a remarkable example of the Russian Revival style. You’ll see it during your tour of Moscow