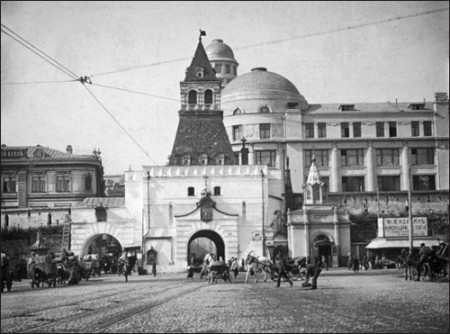 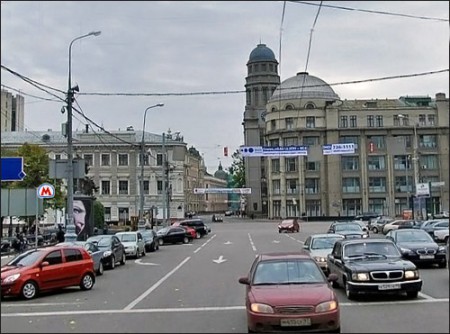 Ilinka gates square, Moscow, 2009
The old and new images of Moscow take us to the old part of our city. In front of us is the Ilyinsky gates square. Today only the name reminds us of the old wall and gates that were dismantled in 1930-s.

Ilyinsky gates were the entrance to Kitay Gorod,  an old bourgeois part of town. The gate got its name from the Ilyinsky monastery, which was located on the street leading to the Kremlin.

The walls and towers of Kitay Good were built in 1535-1538. In old times it was an important fortification defending the approaches to the Kremlin. But with time the wall lost its function. In the 17th century religious processions were held on the wall, but in 1753 this custom was abandoned due to pour condition of the wall. In the 19th century there were suggestions to dismantle this old and useless fortification but Moscow authorities always wanted to preserve the mediaeval look of Moscow. Soviet regime that didn't care about the past destroyed the walls in 1934.

The building on the right with a dome and a turret has survived up to now. It was the Northern Insurance Company constructed by architects Ivan Rerberg and Oltarzhevsky in 1911. Today it houses the Constitutional Court of the Russian federation.

The building on the left was built in 1812 and later reconstructed in 1894. Before the Revolution it accommodated Moscow Merchant's Bank and  nowadays it houses a government office building.

During your Moscow tours you'll have a chance to explore Kitay Gorod,.the old and interesting district of Moscow.