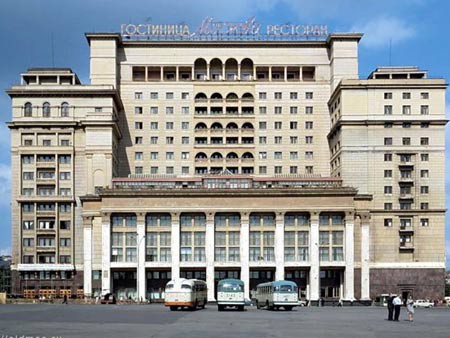 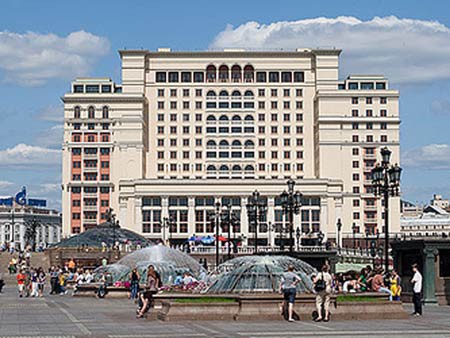 Massive architectural dominant of Moscow city center is the Moskva hotel built in the 30s of the 20th century. The history of its construction is full of twists and turns of that epoch. Originally designed in constructivism style, it stopped satisfying the tastes and trends of the Stalin's Empire. As a result, in the process of its building some alterations, rather radical, were made by the architect Shchusev who completely changed the exterior of the hotel. He made it look grander and more monumental and that corresponded to the ideas of a new society. The legend says that two facades executed on one sheet of paper were shown for Stalin's approval. Stalin put his signature right in the middle of the drawing which made the builders feel confused. However, Shchusev found a solution. He embodied both of these facades in one making it look asymmetrical. Looking at the old photo taken in 1970-80s you can notice large windows and a more ornate left wing of facade and smaller windows and more modest details of the right wing.

The Moskva hotel was built to be one of Moscow's finest hotels and was lavishly detailed with works of art and mosaics by some of the finest artists of the Soviet Union. However, it was demolished in 2004 for a modern reproduction with underground parking and other features not necessary in the 1930s. In the new photo one can see a bit modified facade of the hotel. There are still interior works in the hotel. They promise to open it in 2011.

You will not miss this grand building having a city walk during your Moscow tour.