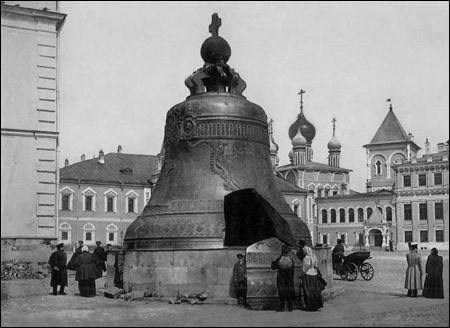 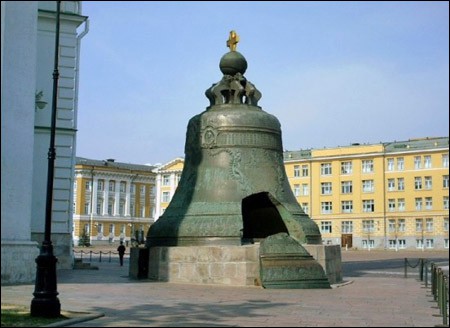 Tsar Bell, Moscow, 2010
The image on these photographs probably rings the bell, doesn't it?
The famous Tsar Bell is one of the highlights of Moscow Kremlin ensemble; it's the biggest bell in the world. It weighs about 200 tons, but no one has ever heard its ringing. The bell was broken during a big fire and it was never lifted on a bell tower.

But what is hiding behind the bell on the old picture?  This is Chudov monastery, founded in the middle of the 14th century by Metropolitan Alexis of Moscow. In old times it was the centre of book culture in Moscow, the well known bible translators lived in Chudov monastery. Legend has it that False Dmitriy I (an impostor who pretended to be the youngest son of Ivan the Terrible) used to be a monk in Chudov monastery.

The monastery did not survive the Soviet period. It was closed soon after the Revolution and destroyed in 1930 .The unique manuscripts of the 11th-18th centuries luckily survived, they are kept today in the State Historical Museum. The relics of the monastery founder can be seen today in the Assumption Cathedral. But most of frescos were lost forever.

The yellow building you see on this spot today was built as a military academy for Red Army leaders. Today it houses various offices of the Russian presidential administration.

Your will tell you lots of interesting facts during your Kremlin tour.