The view on Kremlevskaya embankment 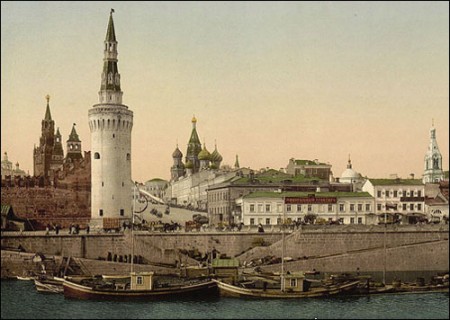 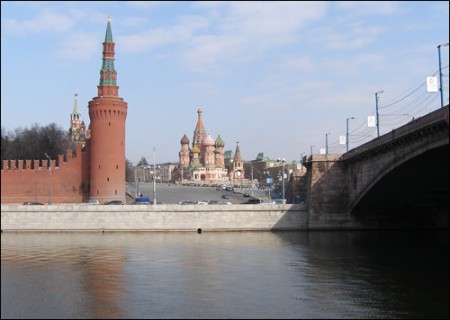 The view on the Kremlin, Moscow, 2010
The both photos were taken from Sofia’s embankment; this is a picturesque spot giving the view on Moscow River, the Kremlin, and St Basil’s cathedral.
The Kremlin hasn’t changed much since the 19th century, but some of the towers were painted white. The one on the old photo is the corner Beklemishevskaya Tower. (It was named after a boyar Beklemishev, who used to live in front of the tower). Built in 1487-1488 the tower was initially meant to protect the ford and the crossing over the river.
Today nothing blocks the view on St Basil cathedral. It’s clearly seen from the side of the river.
It’s hard to imagine that there was a street stretching along the river.  Moscvoretskaya was a busy shopping street; it was part of an old Zaradye district. There was a pier at the Moscow River and many boats anchored nearby.  This historic part of Moscow was demolished during the Soviet times.
The first bridge across the river was built 1829, it was about 50 meters west of the present site. It was wooden and a fire of 1871 destroyed it . A new Moskvoretsky bridge appeared only in 1936-37, it was the only concrete bridge of the 1930s.
This bridge gives a fantastic view on Moscow Kremlin, it’s a great place to come during your city break in Moscow.