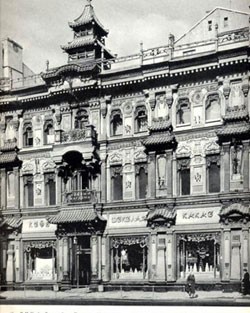 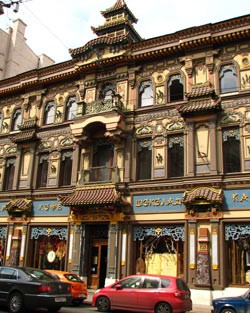 The bright building on Myasnitskaya street stands out among others and attracts passersby with its non-typical elements for Russian architecture. Its dragons and pagodas are characteristic features of Chinese style. Then how such a Chinese House appeared in Moscow?

In the 1890s one of the most successful tea merchant Sergey Perlov decided to build a house with tea and coffee shop on the first floor. The present appearance this edifice obtained in 1896 when it was redecorated due to the arrival of a notable Chinese trader.The owner of Russian tea firm, Sergey Perlov strived to win attention of an important Chinese guest to negotiate a contract for tea delivery. He failed though the building won the attention of Muscovites who became constant customers of this tea store.

It Soviet period of time the upper floors of this house were turned into communal flats (one family-one room, kitchen and toilet facilities are shared), the first floor remained the tea shop. In 90th the deteriorating building  was renovated and given back to the descendants of Perlov family.

Perlov tea house is one of the landmark included in a driving tour of Moscow which you can take on your city break in Moscow.