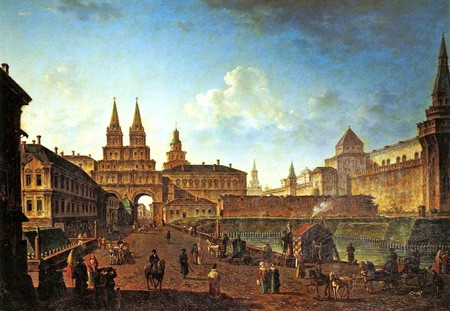 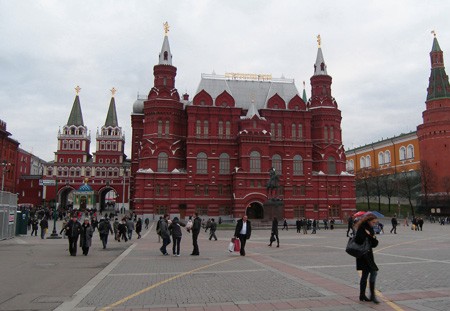 The Resurrection gates and the History museum. Moscow, 2009
The artist of the 19th century shows us the very center of Moscow. To the right we see the wall and towers of Moscow Kremlin. The Resurrection gates were used as the ceremonial entrance to Red Square. Near the gates are some office buildings and the pharmacy. Later the History museum would appear on the same place. We see the Nikolsky bridge and the river Niglinnaya flowing past the gates. Long time ago this river was used as a fortress moat defending the approaches to the Kremlin.

The History museum was built in 1882. Today we can see this elegant red building on its original site. The Neglinnaya River (a tributary of the Moscow River) was so polluted that it was hidden in an underground tunnel in 1817-1819. In the Soviet times Red Square was turned into the scene of enormous military parades. The Resurrection gates were destroyed because this entrance was too narrow for tanks entering the square. And only in recent times the new gates appeared on their historic site. The Resurrection Gates and Iverskaya chapel were reconstructed in 1994. The Kremlin survived to our days without major changes.