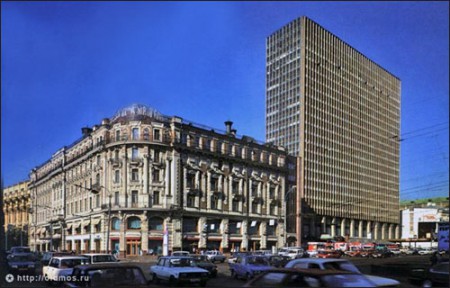 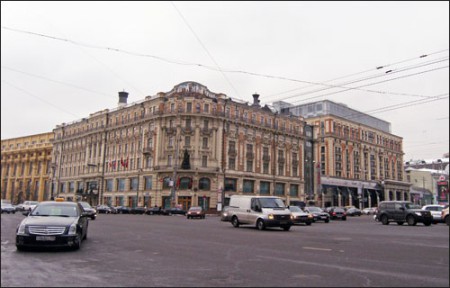 The National and Rits Carlton hotels, Moscow, 2010
The tall box-shaped building in the old photo is the former Intourist hotel, one of the symbols of the bygone Soviet era. The hotel was built in 1970 in the very center of Moscow at the intersection of Tverskaya Street and Mochovaya Street. The hotel was meant for the reception of the foreign guests (hence the name), it had 20 floors, which housed 436 rooms, including 70 suites and 13 apartments.

In the 70s and 80s the "Intourist" personified chic and good life, with its currency bars, black-marketeers and streetwalkers. Such reputation gave rise to lots of jokes. But time had past and the former luxury hotel was becoming more and more outdated. In the 2000s the Soviet "cubic" architecture didn't seem attractive anymore. The former Moscow mayor said that the "Intourist" stuck on Tverskaya street like a rotten tooth. In 2002 the hotel was demolished.

In 2007 a new hotel appeared on the same site. This is the luxury Ritz Carlton  Unlike  its tpredecessor the new hotel was constructed in the historic style and it doesn't overshadow the view on Red Square. It's believed to be the most expensive hotel of the city. It welcomes its guests with the exceptional luxury.

But unfortunately the tendency of constructing posh hotels in the center of Moscow is a bad sign for budget travelers. There're no more chances to find anything affordable in Red Square area.

To the left of the Rits Carlton we see the National hotel. This historic hotel has remained up to now without major changes.

During your Moscow tours  you'll have a chance to learn more about this historic part of Moscow.