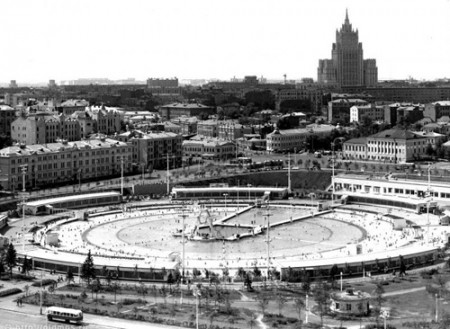 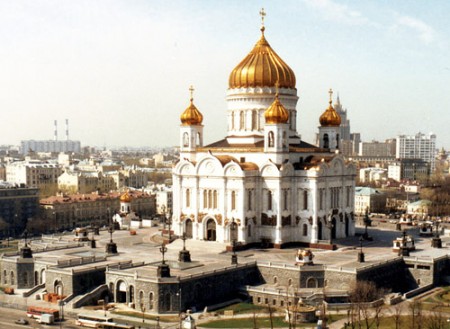 Christ the Savior Cathedral. Moscow, 2009
The swimming pool "Moscow" was opened in 1960 on the site of the former Christ the Savior cathedral. In 1930's the Soviet government was planning to put up a gigantic "Palace of the Soviets" here. In 1931 the cathedral was blown up and the construction started. The soviet high-riser would never be built. The project was abandoned due to the lack of funds, problems with flooding from the nearby Moscow River, the outbreak of war.
The flooded foundation hole remained on the site for a long time until Nikita Khrushchev ordered to transform it into the  largest open air swimming pool, it was called the Moskva Pool.
The swimming pool existed up to 1994. From the beginning of Perestroika the idea of restoring the old cathedral slowly grew in people's minds. In 1990 the decision was taken. Several years later the pool was demolished. It took only 5 years to construct a new cathedral, an exact replica of the old one. The completed Cathedral of Christ the Saviour was consecrated on the Transfiguration day, 19 August 2000.