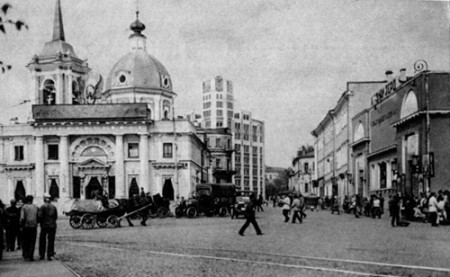 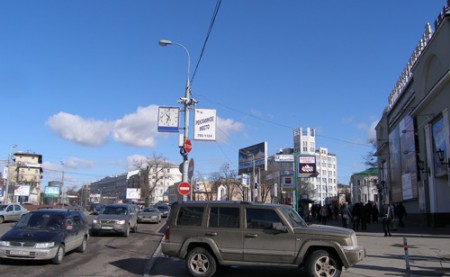 Arbatskaya square, Moscow, 2010
Arbatskaya square has changed a lot since 1925. This is an old square in Moscow,   located on the junction of  Arbat Street, New Arbat Street and Boulevard Ring,
In the old photo we see the church of Boris and Gleb (known since the 15th century it  was totally reconstructed in 1768). The church was demolished in 1930 during the reconstruction of Arbatskaya square. Only in Perestroyka times a small chapel of Boris and Gleb was built in memory of the destroyed church.
On the right we see the building of one of the oldest Moscow cinema hall. Built in 1909 the Khudozhestvennuy was initially intended for 400 people. It appeared  so popular that a few years later the movie theatre was rebuilt to accommodate up to 900 people.  In March 1931 the first Soviet sound film was shown here. The Khudozhestvennuy exists up to now and shows not only mainstream but also different festival movies.
In the background we see a white building of Mosselprom (It is behind the church in the old photo). It has survived up to now. This is a famous constructivism building erected in 1912-1925. In its time it was nicknamed "the first soviet skyscraper" although a few years later it would be overshadowed by much higher Soviet buildings. The house was meant for the grocery concern but later it was reconstructed to house apartments.
Arbatsquya square is a busy transport hub, but just a few meters away you'll find yourself on a picturesque old Arbat street. Why not come here during your Moscow city break?