The story of Homyakov's woods 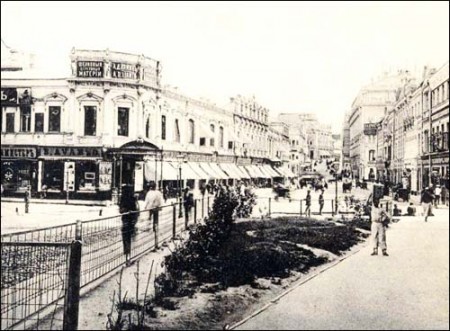 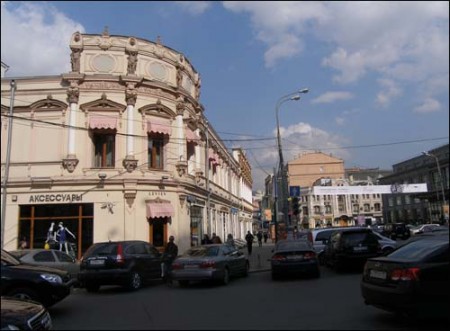 Kuznetsky most street, Moscow, 2010
This story goes back to the 19th century, when a new "park" appeared in Moscow. It gave rise to lots of jokes and was nicknamed "Homyakov's woods".
Homyakov was a poet and philosopher who lived in the first half of the 19th century. Many Russian writers, poets (including Pushkin and Gogol), historians would come to visit him in his house at the corner of Kuznetsky most and Petrovka streets.
After his death the house was inherited by the relatives. In 1898 the wooden building burnt down in a fire. The owners soon moved into a neighboring stone house.
This was about the time when Moscow authorities were trying to widen Petrovka street. The main obstacle was a fenced patch of Homyakov's land. But the owners didn't want to sell it cheaply, they demanded 100 thousand rubles (at that time it was more than a 3-storey house would cost). As a result the Homayakovs planted a couple of bushes and announced that they really couldn't do without their favorite "woods".
Lots of jokes and caricatures were circulating around Moscow. Most of papers were discussing this case. In the end, tired of this scandalous reputation, the Homyakovs agreed to sell this land for 38 thousands (a fair trade at the time)
Moscow old streets keep memory of lots of fascinating stories. Why not come here on your Moscow city break?