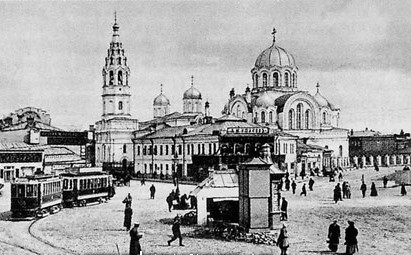 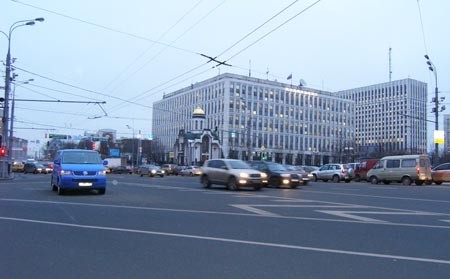 The old photo was taken in the early 1900s. It shows Kaluzhskaya square (it's not far from where today is Oktabrskaya metro station). The main attraction of the square was the church of the icon of the Mother of God of Kazan. It was built in 1886 in memory of the Russian-Turkish war. The church was constructed in Russian-Byzantine style out of marble.

The church was closed in 1922 (like many other religious buildings at that time). Luckily the building survived the Revolution. It was turned into a museum, later a cinema hall was opened here.

The former church was demolished only! in 1972. At that time the American president Richard Nixon was due to arrive; lots of importantly preparations were to be done. The president was supposed to follow Jakimanka street past the church on the way to the Kremlin. The Soviet government deemed it unattractive and decided "to improve" the image of the Soviet Moscow. The church was blown up in one night. Nixon never learnt this, his car followed another road …