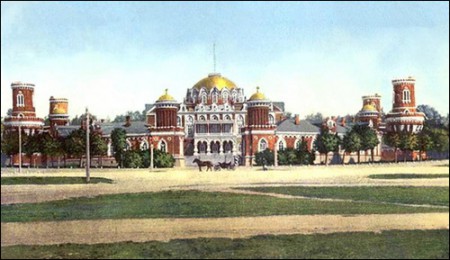 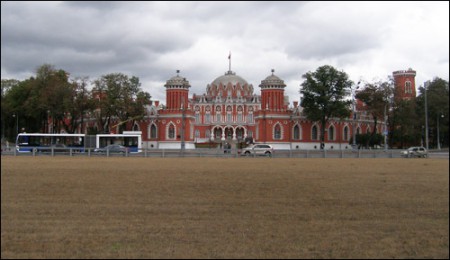 Petrovsky palace, Moscow, 2010
Petrovsky Palace was built for Catherine the Great and designed by the famous Russian architect Matvei Kazakov in 1775-82.  It was meant to be the last overnight station of royal journeys from St. Petersburg to Moscow, hear the empress had a chance to rest before entering Moscow. Catherine visited once, in 1785. Her son Paul stayed in the palace  before he was crowned in the Moscow Kremlin.  In the 19th century Petrovsky Palace  witnessed many official ceremonies, it was from here that  Russian tsars began their journeys to the Kremlin for their coronation.
In September 1812, the palace had another famous visitor. Petrovsky Palace was where Napoleon was hiding  from the terrible fires that engulfed Moscow. "From here, all in thoughts, he looked at the terrible fire," the poet Alexander Pushkin wrote. "Napoleon's room" in the palace was preserved.
The building remained a royal residence until 1918. After the Revolution, the Petrovsky Palace was very lucky. Unlike many other imperial palaces in Moscow it was not reconstructed by the Bolsheviks.  In 1923 the palace housed Zhukovsky Air Force Academy. Among the famous graduates are Yury Gagarin, Valentina Tereshkova, great aircraft designers Sergey Ilushin, Alexander Yakovlev, Artem Mikoyan.
In the 1990s the building was closed for reconstruction and the Academy abandoned the site. The palace was officially reopened in 2009 by Moscow Mayor Yuri Lushkov as the House of Receptions of the Government of Moscow. It will be used as a hotel for visiting dignitaries to Moscow and will host official receptions.
It's  not possible to get into the palace but you can see the building on your way from Sheremetevo airport. It'll be interesting to see more buildings by the same architect during your Moscow tours.