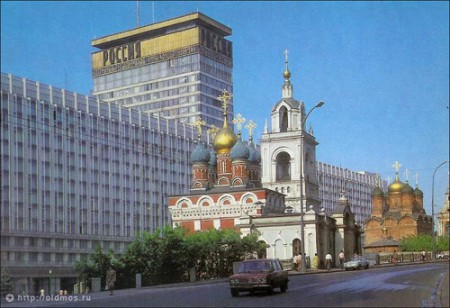 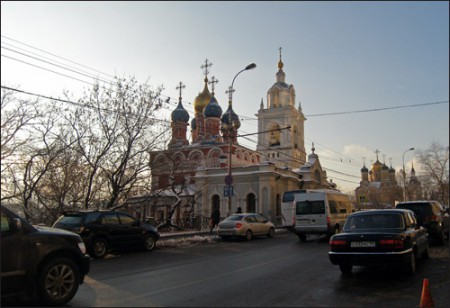 Varvarka street, Moscow, 2010
Both pictures were taken in the historical center of Moscow. This is Varvarka street, the ancient road leading to Red Square. In front of us is the 17th century church of St George with its bell tower, constructed in the 18th century.  But what is the grey gigantic building behind?

In the old picture we see the building of the former biggest hotel in Europe – the hotel "Russia". It was built in 1964 -1969 by the architect Dmitry Chechulin.

During the 1930—1940s this old district of Moscow was reconstructed several times. The old churches, streets and synagogues (this area used to be the hub of Moscow Jewish community) was completely demolished. The Soviet government was initially planning to construct the House of Industry but later in 1947 Moscow the architect D. Chechulin started the construction of an Administrative Building, which would have been the eighth of what is now known as the Seven Sisters. In 1953 Stalin died and the building construction was frozen. A few years later the same architect suggested to raise a hotel on the same site.

The Russia hotel boasted 3182 rooms and could accommodate 5300 guests.  In the 70s the Russia Hotel was registered in the Guinness Book of Records as the largest hotel in the world (in 1993 it was surpassed by MGM Grand in Las Vegas). It remained the largest hotel in Europe until its 2006 closure.
During the Soviet times Russia Hotel was extremely popular. The interiors of the hotel were shot in many movies. For all years of work Russia Hotel accommodated more than ten millions people. It even had some famous guests - Mikhail Gorbachev, George Bush senior, Mike Tyson.

The building seemed very modern in the time of its construction, but unfortunately it didn't fit into the surrounding architectural ensemble. More over it blocked the view on the Red Square and the Kremlin. With time it received was more and more criticism. In 2006 Russia Hotel was closed, in March of the same year the dismantling of the building started.

During the demolition of the building an unusual discovery was made. The diggers bumped into an undegroud  system of tunnels and  halls that could accomodate a large number of people. This secret bunker most probably was connected to the Kremlin and was built in the middle of the 20th century. But the officials prefer not to talk about it.
There were ambitious plans to construct a multifunctional complex of hotels, shops, entertainment facilities. But due to economic crises the project was frosen. At the moment there's a vast sandlot on this site. We invite you to come to Varvarka street during your Moscow tours and have a look at this unusual scenery.