The church of Saint Nicholas on Tverskaya Zastava 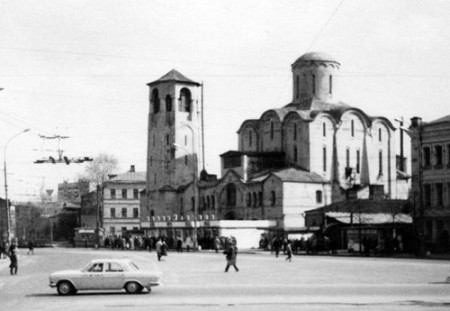 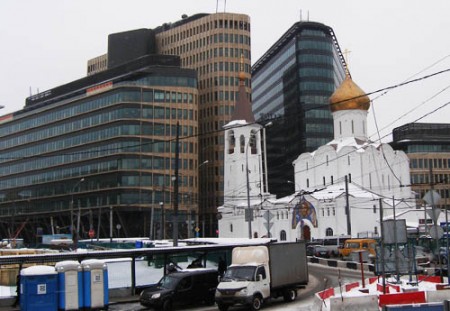 The church of Saint Nicholas, Moscow, 2010
During the Soviet times the majority of Moscow churches didn't function. They were not always destroyed, but too often they were neglected. The former churches accomodated Soviet museums, were used as  storehouses, clubs, prison cells and even swimming pools.The church we see on the old Soviet photo had no cross. This usually happened to churches when they were closed down by the Soviet State.

The church of Saint Nicholas on Tverskaya Zastava was built in the beginning of the 20th century by the architect Gurdjienko. It belonged to Moscow old believers’ community. It took many years to finish the construction; the church opened its doors only in 1922.  But it didn’t function for a long time. In 1935 the church was closed. During the war it was used as an anti-aircraft defense storehouse, later it accommodated Soviet sculptor’s studio.

Only В 1993 St Nickolas church was returned to The Russian Orthodox Old-Rite Church. The services started in 1995.
Modern office buildings appeared a few years ago (2007-2008). The contrast of old and new is very common for the present day Moscow cityscape. Some people find it sad,  the others feel excited about Moscow architectural diversity.
Your Moscow tour guide will show you the incredible Moscow architecture during your city tour