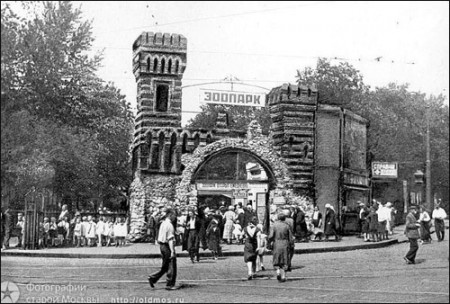 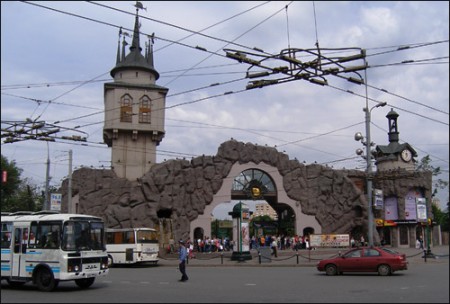 Moscow Zoo, Moscow, 2010
In black and white photo one can observe the old entrance to the Moscow Zoo founded in 1864 by a group of professor-biologists from the Moscow State University. After the October revolution the zoo was nationalized, and the ownership was transferred to the city of Moscow. It has remained under Moscow's control ever since.

In 1990, the zoo was decided to be renovated. Notable changes were introduced: the new main entrance in the shape of a large rock castle appeared on the spot of the old one; the footbridge that connected the old (1864) and new (1926) properties of the zoo was constructed.  The zoo was expanded once more. New exhibits were opened including a sea aquarium, an aviary, a creatures of the night exhibit, a sea lion exhibit and a section aimed at children. Waterfalls and streams were added throughout to give the zoo a more natural feeling.

If you travel to Moscow with kids, the Moscow Zoo is a nice place to take them to. Ask your Moscow tour guide how to get there.