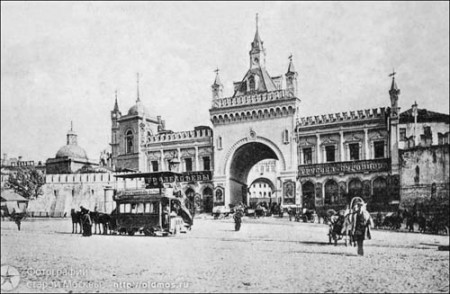 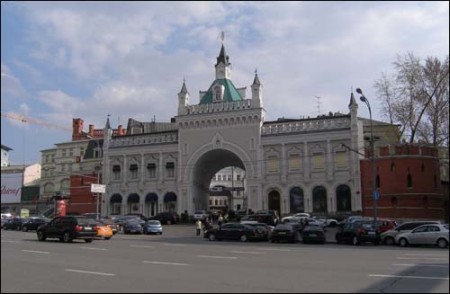 Tretyakov Drive, Moscow, 2010
The mediaeval-looking archway is the entrance to one of the shortest streets of Moscow. It appeared in the end of the 19th century and is named after well-known Moscow businessmen and art collectors Tretyakov brothers.
Tretyakov Drive is a very unusual street. It was built in 1870 as an alternative way to enter Kitay Gorod, an old Moscow commercial district. Kitay gorod, or literally "China town',  before the Revolution  was encircled with walls, it looked like a city within a bigger city. Tretyakov brothers, who had there own shops in Kitay Gorod, financed the construction of a new street. Why didn't they like the existing streets? Why did they need to cut new gates in the wall? There's an interesting explanation.  At that time merchants carrying goods were stopped at Kitay Gorod gates to pay taxes. The Tretyakovs, constructing a new entrance, invented a way to avoid taxation.  Another version is that the Tretyakovs were often frustrated with the traffic on nearby Nikolskaya street (yes, traffic jams happened even in the 19th century!)  and in the end decided to built a new road.
The elegant building we see on the old photo was designed by architect Alexander Kaminsky in 1871. It has survived to our days.
Tretyakov Drive is known today as one of the most expensive streets of Moscow. It's also called the street of boutiques : here one can find  "Gucci", "Armani", "Dolce Gabana", "Bulgari" – all in one place.
If you're interested in the history of Moscow, spend some time exploring the nearby Kitay Gorod during your Moscow city break.