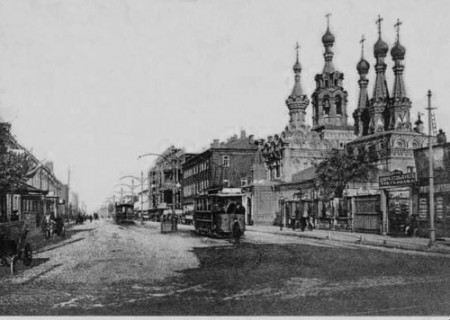 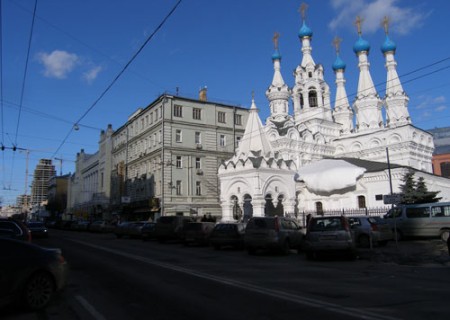 Malaya Dmitrovka street, Moscow, 2010
Malaya Dmitrovka  is a historic Moscow street. It borrowed its name from an ancient trade route leading to Dmitrov, a town to the North of Moscow.  The street's history is closely connected with the writer and playwright Anton Chekhov. Chechov  lived here from 1890 to 1892 ( in houses 11,12 and 29) and wrote the stories The Duel and Ward No. 6.

At the beginning of Malaya Dmitrovka is a beautiful old church. The Church of the Nativity of the Theotokos at Putinki was built in 1653. It looks unusual and picturesque. A French architect Eugène Viollet-le-Duc  was impressed with its architecture and once called it "Russian Gothic".  A unique building  with six tent-shaped roofs was the last of its kind to be built in Russia  A legend has it that the Patriarch Nikon passing by the church on his way to the monastery was surprised how "unorthodox' it looked and immediately banned the construction of tent-like churches in Russia. In the Soviet times the services in the church were forbidden. It was used as an office building and later as a rehearsal house of the Moscow Circus. Up to 1990 dogs and monkeys were trained here. Today it's a working Russian Orthodox church.

Many historic buildings have survived on Malay Dmitrovka. Among them is the famous Lenkom theatre (the second house to the left of the church). Built in Art-Noveau style in 1908 it was initially used as a Merchants' Club. .Malaya Dmitravka is a pleasant destination for walking tours with  your Moscow tour guide.