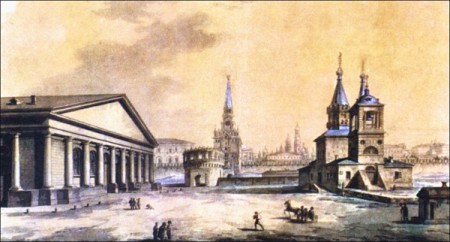 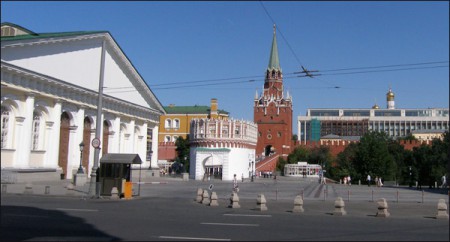 Manege, Kutafia and Trinity towers, Moscow, 2010
Both pictures were taken in the very center of Moscow. In front of us is the entrance to Moscow Kremlin.

A white building with columns  is the famous Moscow Manege. It was built in 1817 in honor of the victory over Napoleon. The Manege was used to house parades of horsemen and a training school for officers. It was so spacious that it could hold an entire regiment—over two thousand soldiers. It was in the Manege where young Leo Tolstoy had his first riding lessons, and later, in old age, he learnt to ride a bicycle. Since 1831 it has become an exhibition place. Nikolai Rubinstein and Hector Berlioz  performed here before a crowd of 12,000 people. After the Revolution the building was chosen to be a government garage but after its reconstruction in 1957 it was turned into an art gallery.  It was there that Khruschev  rebuked avant-garde artists for promoting degenerate art.

The Kremlin towers haven't changed much. We see a small white watch-tower, called Kutafia, and a tall (80 m) red Trinity tower. Today, the gates of the Trinity tower is the main visitors' entrance into the Kremlin. In old times this entrance was mainly used by the clergy and the royal family.

The church of St Nickolas that we see in an old photo was built in the 1648. It was dismantled in 1838 by order of Nickolas I.

In the middle of the 20th century the Palace of Congress was built in the Kremlin. We can see it in the modern photo to the right of the Trinity tower. It used to be the main place for mass state events particularly party congresses. Today it is  a concert hall and a venue of the Kremlin ballet.
You can learn more about Moscow historic center during your Moscow tours with a guide.