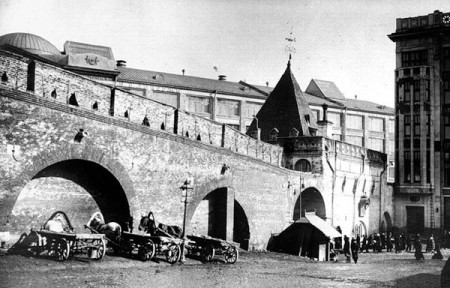 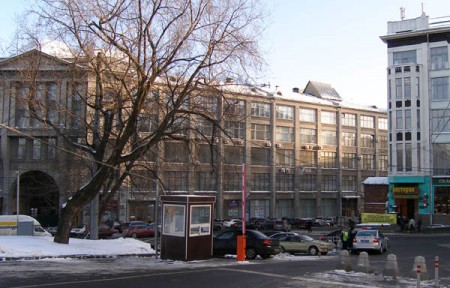 Beginning of Varvarka street, Moscow, 2010
Kitay-gorod is one of the oldest parts of Moscow. It is separated from the Moscow Kremlin by Red Square. Hundreds of years ago craftsmen and merchants settled here making the area a bustling trading quarter.
Kitay-gorod was once encircled by medieval walls, it was like a town within a bigger town. The walls were erected in 1536-39 by an Italian architect known under the name Petrok Maly.  They were as thick as they were high, the average being six meters in both dimensions. The walls survived up to the 20th century, the last of the towers were demolished in the 1930s.
In the 19th century lots of banks and shops were opened here, Kitai-gorod was known as the most prestigious business area of Moscow. Much of the architecture has survived since that time. Here you can find beautiful examples of Moscow Art Noveau and colorful churches scattered throughout this ancient neighborhood.
Moscow mayor recently announced plans for a full-scale restoration of the wall. Some parts of it have already been rebuilt. A new tower has been added, inside are a couple of restaurants and bars.