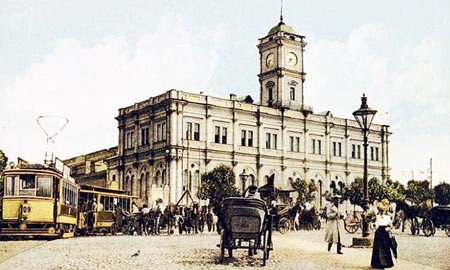 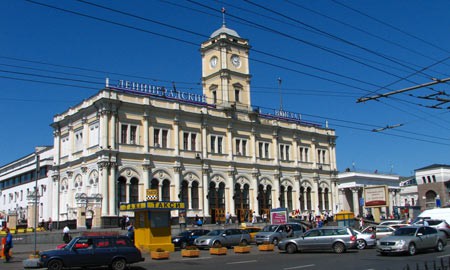 Leningradsky train station
Bright colours of modern photography demonstrate us the oldest train station in Moscow, originally known as Peterburgsky rail terminal.  Constructed under the guidance a famous architect, K Ton (the author of Christ the Saviour Cathedral and The Grand Kremlin Palace) in the reign of Emperor Nicolas I it connected two big cities, Moscow and St. Petersburg in 1851. Upon Nicolas death the train station was named Nikolayevsky and retained this name until 1924, when the Bolsheviks renamed it Oktyabrsky Station to commemorate the October Revolution. The present name was given a year later when the city of Petrograd became Leningrad. The train station which still bears the name Leningradsky has a "twin brother" in St. Petersburg, Moscovsky train station built by the same architect in the same architectural style.  Having one of your Moscow tours, ask your Moscow tour guide to show you directions to get there either by taxi or by metro. Carriages and trams seen in the old picture are echoes of the past.